The Seventeenth Coffin - A One-Act Play

The Seventeenth Coffin - A One-Act Play

Synopsis: A priest struggles with his own convictions, and mortality, after experiencing a multiple victim homicide event at an all boys’ Catholic High School graduation.

A Play in One Act By Kevin T. Baldwin

FATHER THOMAS WEEMS – An American priest and headmaster at an all boys’ high school. 40s to late 50s. Dealing with an unthinkable tragedy at his school.
MARIA GORETTI – A woman, flexible casting over 20. Although loosely based upon the actual Italian 12- year old patron saint of chastity, youth, poverty, purity and forgiveness, she is played in the form of an adult and should not be played with any Italian accent.
BENNY – A funeral parlor worker, flexible casting over 20. LARS - A funeral parlor worker, flexible casting over 20.
FATHER MCMANUS – An older American priest, late 50s to mid 70s, somewhat cantankerous in demeanor but still a good man. James 5:16 – “Confess [your] faults one to another, and pray one for another, that ye may be healed. The effectual fervent prayer of a righteous man availeth much.”
PRESS:

ACTON, MA: Gun control and religion square off in “The Seventeenth Coffin”, a new one-act play written by Kevin T. Baldwin of Worcester, one of twelve plays being performed by Theatre III in Acton.

The play tackles the Second Amendment and focuses on a priest coming to terms with a great tragedy. The priest, Father Weems, takes a moral stand and ultimate journey when the gun control debate hits close to home.

As the story unfolds, Father Weems, played by Baldwin, sits and watches helplessly as coffin after coffin passes near him after a mass shooting. The level of physical and emotional devastation in its wake becomes overwhelming for the man.

But has the catastrophic event on campus brought the clergymen closer to a more mutual understanding or are they now more polarized than ever as a result?

Father Weems scrutinizes these questions and more in “The Seventeenth Coffin” as he encounters an unusual woman, played by Lexi Deschene, who has come forth to console the priest, although he does not know why.

Baldwin’s play is an analysis of individual vs. societal beliefs and through many plot twists and turns, without being overly maudlin, self-indulgent or preachy, the play becomes more about the birth, death and re-birth of a man’s beliefs. 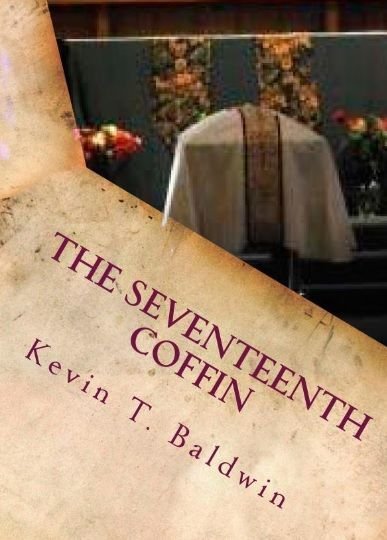